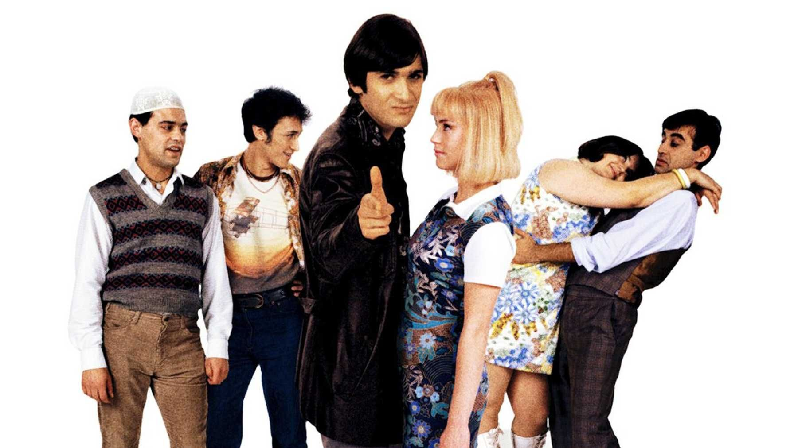 We have found in our work that young people respond positively to film and cinema in classrooms to help explore subjects such as history, law, arts and humanities. This is often the first time working-class children get access to this kind of learning, by studying films that cover issues such as social change, race, conflict, gender, religion, philosophy, power and empire.

This also allows the study of cultures, histories, stories and traditions based on more than just European curriculum and texts, encouraging enquiry, critical thinking, debate and academic development by providing opportunities to study the complexity of world politics, the power relations of empires, issues such as the plurality of Muslim history and the Cold War conflicts of the last century.

So below – in no particular order – is Samosa Media’s list of 20 films everyone should watch before they’re 20.

What have we missed? What would you put on the list? Please let us know.

12 Angry Men (1957) – Twelve members of the jury deliberate following the closing arguments in a murder trial, with a guilty verdict meaning a death sentence for an inner-city teen. One juror casts doubt on elements of the case. Personal issues rise to the surface, and racism threatens to derail the delicate process that will decide one boy’s fate. Director: Sidney Lumet; Screenplay: Reginald Rose. Starring: Henry Fonda and Lee J. Cobb.

To Kill a Mockingbird (1962) – Based on the book by Harper Lee, six-year-old Scout Finch and her older brother Jem live in sleepy Maycomb, Alabama, spending much of their time spying on their mysterious neighbour, Boo Radley. When Atticus, their widowed father and a respected lawyer, defends a black man named against fabricated rape charges, the trial and related events expose the children to the evils of racism and stereotyping. Director: Robert Mulligan; Screenplay: Horton Foote. Starring: Gregory Peck, Mary Badham and Robert Duvall.

La Haine (1995) – When a young Arab is arrested and beaten unconscious by police, a riot erupts in the notoriously violent suburbs of Paris. Three of the victim’s peers wander aimlessly about their home turf in the aftermath as they try to come to terms with their outrage over the brutal incident. After one of the men finds a police officer’s discarded weapon, their night seems poised to take a bleak turn. Writer and Director: Mathieu Kassovitz. Starring: Vincent Cassel, Hubert Koundé and Saïd Taghmaoui.

The Crucible (1996) – in 1692 married man John Proctor decides to break off his affair with his young lover, Abigail Williams, who then leads other local girls in an occult rite to wish death upon his wife, Elizabeth. When the ritual is discovered, the girls are brought to trial. Accusations begin to fly, and a literal witch hunt gets underway. Director: Nicholas Hytner; Writer: Arthur Miller. Starring: Winona Ryder and Daniel Day‑Lewis.

Do the Right Thing (1989) – Salvatore is the Italian owner of a pizzeria in Brooklyn. A neighbourhood local, Buggin’ Out, grows upset when he sees the pizzeria’s Wall of Fame only has Italian actors. Buggin’ Out thinks a pizzeria in a black neighbourhood should showcase black actors, but Sal disagrees. The wall becomes a symbol of racism and hate to Buggin’ Out and others in the neighbourhood, and tensions rise. Writer and Director: Spike Lee. Starring: Spike Lee, Danny Aiello and Rosie Perez.

To Kill a King (2003) – As the English Civil War ends in the mid-17th century, Oliver Cromwell begins seizing power alongside Thomas Fairfax. The dethroned king, Charles I, is held captive while Cromwell, Fairfax and their allies decide his fate. Although the king still has many loyalists, Cromwell is determined to see him put on trial. Director: Mike Barker; Screenplay: Jenny Mayhew. Starring: Tim Roth, Rupert Everett and Olivia Williams.

Elizabeth (1998) – Elizabeth Tudor becomes queen of a divided and dangerous England in 1558. Perceived as weak, facing threats from within and abroad, and advised to marry by her close counsel William Cecil, she will instead only be married to her country. Intelligent and cautious, she must choose whether to trust her shrewd secretary, master of espionage Walsingham, or her secret lover, Sir Robert Dudley. Director: Shekhar Kapur; Writer: Michael Hirst. Starring: Cate Blanchett, Geoffrey Rush and Joseph Fiennes.

Viceroy’s House (2017) – Lord Louis Mountbatten arrives at Viceroy’s House in Delhi in 1947 with his strong-willed wife Edwina and daughter Pamela. As the last Viceroy of India, he must oversee the dissolution of the British Raj and the establishment of an independent Indian state. Mountbatten attempts to mediate a disagreement between the two major Indian political leaders – Jawaharlal Nehru, who wants India to remain intact as one nation, and Muhammad Ali Jinnah, who wishes to establish the separate Muslim state of Pakistan. Starring: Gillian Anderson, Hugh Bonneville and Om Puri.

Troy (2004) – Based on Homer’s Iliad, portraying the battle between the ancient kingdoms of Troy and Sparta. While visiting Spartan king Menelaus, the Trojan prince Paris falls for Menelaus’ wife Helen and takes her back to Troy. Menelaus’ brother, King Agamemnon, uses his brother’s fury as a pretext to declare war against Troy. Director: Wolfgang Petersen. Starring: Brad Pitt, Orlando Bloom and Diane Kruger.

The Godfather Part I (1972) and Part II (1974) – Based on Mario Puzo’s novel about a powerful Italian-American crime family. When Don Vito Corleone’s youngest son, Michael, reluctantly joins the Mafia, he becomes involved in an inevitable cycle of violence and betrayal. Although Michael tries to maintain a normal relationship with his wife, Kay, he is drawn ever deeper into the family business. Director: Francis Ford Coppola. Starring: Al Pacino, Marlon Brando and Diane Keaton.

Hotel Rwanda (2004) – Paul Rusesabagina, a Hutu, manages the Hôtel des Mille Collines, and lives happily with his Tutsi wife and their children. But when Hutu military forces initiate a campaign of ethnic cleansing against the Tutsi minority, Paul is compelled to allow refugees to take shelter in his hotel. As the UN pulls out, Paul must struggle to protect the Tutsi refugees in the face of the escalating violence of the Rwandan genocide. Director: Terry George; Screenplay: George and Keir Pearson. Starring: Don Cheadle, Joaquin Phoenix and Sophie Okonedo.

Reluctant Fundamentalist (2007) – Changez Khan is a middle class Pakistani from Lahore chasing his dreams of success in a prestigious Wall Street firm. His future is on an upward trajectory, but as he watches news footage of the twin towers falling, his life takes an entirely different path. Director: Mira Nair; Writer: Mohsin Hamid. Starring: Riz Ahmed,Kate Hudson and Liev Schreiber.

Schindler’s List (1993) –  Businessman Oskar Schindler arrives in Krakow in 1939, ready to make his fortune from World War II. After joining the Nazi Party out of political expediency, he staffs his factory with Jewish workers for similarly pragmatic reasons. When the SS starts exterminating Jews in the Krakow ghetto, Schindler arranges to have his workers protected to keep his factory operating, but soon realises that in so doing, he is also saving innocent lives. Director: Steven Spielberg. Starring: Liam Neeson, Ben Kingsley and Ralph Fiennes.

Romeo and Juliet (1996) –  we agonised for ages over this or Michael Radford’s screenplay of Merchant of Venice starring Al Pacino. Baz Luhrmann’s adaptation  of Shakespeare’s most famous tragedy, updated to a modern setting, got the nod. The Capulets and the Montagues are two rival gangs in the city of Verona Beach. Juliet’s father has arranged her marriage to the boorish Paris as part of a strategic investment plan. But when Romeo attends a masked ball thrown by her parents, he and Juliet fall in love. Not a happy ending. Director: Baz Luhrmann. Starring: Leonardo DiCaprio, Claire Danes and John Leguizamo.

Fog of War (2004) – Former corporate whizzkid Robert McNamara was the controversial Defense Secretary during the Vietnam War. This Oscar-winning documentary, augmented by archive footage, gives the conflicted McNamara a platform on which he attempts to confront his and the US government’s actions in Southeast Asia in light of the horrors of modern warfare, the end of ideology and the punitive judgment of history. Director and Screenplay: Errol Morris. Starring: Robert McNamara.

The Killing Fields (1984) – New York Times reporter Sydney Schanberg covers the Cambodian Civil War with help of local interpreter Dith Pran. When the US Army pulls out amid escalating violence, Schanberg makes exit arrangements for Pran and his family. Pran, however, intends to stay in Cambodia to help cover the unfolding story, a decision he may regret as the brutal Khmer Rouge rebels move in. Director: Roland Joffe; Screenplay: Bruce Robinson. Starring: Haing S. Ngor, Sam Waterston and John Malkovich.

All The President’s Men (1976) – Two green reporters and rivals working for the Washington Post, Bob Woodward and Carl Bernstein, research the botched 1972 burglary of the Democratic Party headquarters at the Watergate apartment complex. With the help of a mysterious source, codenamed Deep Throat, the two reporters make a connection between the burglars and a White House staffer. Despite dire warnings about their safety, the duo follows the money all the way to the top. Director: Alan J Pakula. Starring: Robert Redford, Dustin Hoffman and Jane Alexander.

Kingdom of Heaven (2005)  – Village blacksmith Balian joins his long-estranged father Baron Godfrey as a crusader to Jerusalem. After a perilous journey to the Holy City, he enters the court of the leprous King Baldwin IV. Jerusalem is rife with dissent, led by the treacherous Guy de Lusignan, who wishes to wage war against the Muslims led by their Sultan, Saladin. Director Ridley Scott; Writer: William Monahan. Starring: Orlando Bloom, Eva Green and Liam Neeson.

The Battle of Algiers (1966) – Paratrooper commander Colonel Mathieu, a former French Resistance fighter during World War II, is sent to 1950s Algeria to reinforce efforts to crush the uprisings of the Algerian War. There he faces Ali la Pointe, leader of the Algerian Front de Liberation Nationale, who directs terror strategies against the colonial French occupation.  As each side resorts to increasing brutality, no violent act is too unthinkable. Director: Gillo Pontecorvo. Starring: Saadi Yacef, Jean Martin and Samia Kerbash.

East Is East  (1999) British comedy-drama film set in Salford, Greater Manchester, in 1971, the story of a mixed-ethnicity British family,  with Pakistani father George (Om Puri) and English mother, Ella (Linda Bassett), based on play East is East by Ayub Khan-Din.  The title derives from the Rudyard Kipling poem The Ballad of East and West, the opening line reads: “Oh East is East, and West is West, and never the twain shall meet”. Writer Ayub Khan. Director Damien O’Donnell. Starring: Om Puri, Linda Bassett and Jimi Mistry.