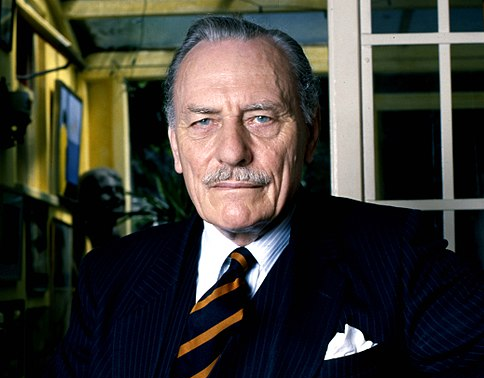 Who would have believed that 50 years after one of the most notorious race baiting rants ever given by a British politician – Enoch Powell’s ‘Rivers of Blood’ speech – that today some people want to revere him with a celebratory Blue Plaque.

Equally worrying about this upsurge in support for Powell today is the promotion of Powell by the city’s local newspaper the Express and Star. It covered the campaign to honour the race hate monger on the day that black football pioneer Cyrille Regis was celebrated at his funeral in nearby Birmingham.

Over 70 percent of Express and Star readers who took part on a poll supported a blue heritage plaque in memory of Powell whose 1968 speech warned of violent social unrest in Britain.

Last week an event hosted by the Express and Star to discuss the ‘rivers of blood’ speech was boycotted by two prominent race equality figures who declined to be on the same stage as the UKIP MEP.

Respected activists Patrick Vernon OBE, and Dr Shirin Hirsch from the University of Wolverhampton, withdrew from the event at the Wolves Lit Fest after organisers invited Bill Etheridge.

UKIP MEP Etheridge has written a book celebrating gollywog dolls and was reported to have told a UKIP youth conference that Adolf Hitler was a “most magnetic and forceful public speaker.”

He allegedly advised UKIP-supporting youths to take speech-making tips from the Nazi, who he described as a “hateful figure who achieved a great deal.”

Vernon tweeted his disgust at the newspaper’s coverage to award a blue plaque to Powell on the 50th anniversary of the ‘rivers of blood’ speech.

He wrote: “@ExpressandStar are now campaigning for a #blueplaque for #EnochPowell but refused to do a proper news story on the first BME to receive one back in 2013 Rev Oliver Lyseight founder of 1st black led church in Britain.”

The paper reported the story rather than campaigned, but there was concern that the news report was largely uncritical of Powell and the legacy of hate his words produced.

There was also frustration by local race equality supporters that the Wolverhampton paper, serving a town where Powell was once an MP, hosted an event where a controversial UKIP politician was invited to speak.

The paper’s editor, Keith Harrison, was unavailable for comment at the time this article was published.

An online poll in the Express and Star asking if Powell should have a blue plaque in Wolverhampton was showing 71% in favour and 29% against with 1,500 votes counted. Dr Hirsch tweeted that it was an “attempt to rehabilitate Enoch Powell.”

Wolverhampton is just one of several West Midlands areas with a murky history of racism. Smethwick became linked with a campaign by the Conservative MP Peter Griffiths ‘If You Want A N***r For A Neighbour Vote Labour’. He was re-elected, but the slogan prompted Malcolm X to visit the town.

Campaigners and academics have questioned the bid to honour Powell when he is widely regarded as a xenophobe who divided communities and spread fear of immigration.

After being sacked from the Cabinet after his incendiary speech, delivered in Birmingham, dock workers marched in support of Powell and there was an upsurge in racial abuse and attacks in the wake of the speech.

Powell’s speech predicted a future of social unrest as a result of ‘coloured’ immigration, but by creating and provoking a hostile atmosphere around race and immigration he knowingly created a self-fulfilling prophesy.

Shortly before he delivered his speech he confided in his friend Clement Jones, who worked at the Express and Star, “I’m going to make a speech at the weekend and it’s going to go up ‘fizz’ like a rocket; but whereas all rockets fall to the earth, this one is going to stay up.”

OBV’s Simon Woolley said: “Our parents will weep when they see the hero worshiping of such a dreadful xenophobe. Their lives where put in a perilous and miserable situation because of the hatred stirred up by Enoch Powell. Today we must reject these revisionist attempts to rewrite history and portray Powell as a hero.”

The Express and Star yesterday quoted the Blue Plaques secretary Barry Hodgson who said: “It is perfectly feasible that we will see a blue plaque for Enoch Powell at some time in the future.” Hodgson stood for UKIP in Wolverhampton at the last general election.

Reassuringly, the majority of the 150-strong audience at the Wolves Lit event rejected the idea of a plaque for Powell when the question was put to them. Panellist Paul Uppal, a former Conservative MP for Wolverhampton, was among those who opposed the plaque.